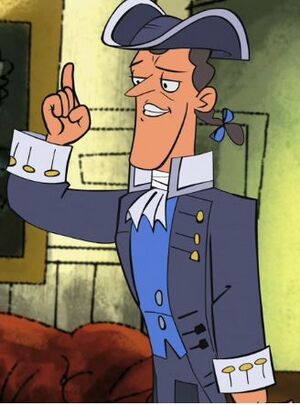 And if you look to your left

During the episode, he shows people around Mount Vernon, mentioning wonderful facts about George. He also (inadvertently) tells Dan the location of the various personal artifacts of George. When Dan and Chris break into the room, he is briefly distracted by Elise(playing herself off as a forgetful bimbo), but eventually realizes someone has broken in. Dan throws George Washington's dentures at him, stunning him, but he manages to call in the Mount Vernon Militia Men before they can escape.

He is last seen at the end of the episode, reading from the tampered with diary, apparently unaware it was altered.

Retrieved from "https://wiki.danvs.net/w/index.php?title=Mount_Vernon_Tour_Guide&oldid=980"
Cookies help us deliver our services. By using our services, you agree to our use of cookies.