From The Dan VS Wiki
Jump to navigation Jump to search 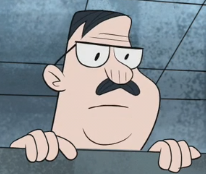 Mr. Zimmerman is the boss of the Telemarketing Temp Company(LA branch) from 'Pre-Season 1' to 'The Telemarketer', and was Chris's boss when he worked there.

Personal Life and Events Before the Show[edit]

It's unknown how Zimmerman got to his high ranking role, but he managed to beat the odds and prove that nice guys can finish first. He owns a orange cat of unknown name, though he appears to love it. By the time the show starts, he's the boss of their downtown LA location, where Chris Pearson works.

During the first half of Traffic, Dan continiously pesters Chris at work, eventually prompting Mr. Zimmerman to inform Chris there are no personal calls. He's clearly a forgiving boss, not taking action against Chris, for example.

At some unknown point between this episode and "The Telemarkter", the company relocated to Reseda, taking Zimmerman with them.

Elise manages to discover The Telemarketer is working at the company, and in the wee hours of the morning the trio go to stake out the building. Mr. Zimmerman(talking with a red haired woman, possibly a secretary or wife) is outside, with Chris suggesting the man could probably get them inside.

Elise, following her usual approach, attacks and beats Mr. Zimmerman to near death, only realizing that wasn't what Chris meant after.(This scared Dan so much he took Elise off his revenge list.

While we never see him again, Chris states he lived, and within a week he's "off the respirator", implying Elise seriously damaged his lungs, and by extension, his rib cage. Most likely breaking most of his ribs and collapsing one of his lungs, which would require emergency surgery.

It's implied these injuries forced him to resign, as by Season 3 someone............else, is running the company's Reseda location.

Retrieved from "https://wiki.danvs.net/w/index.php?title=Mr._Zimmerman&oldid=799"
Cookies help us deliver our services. By using our services, you agree to our use of cookies.